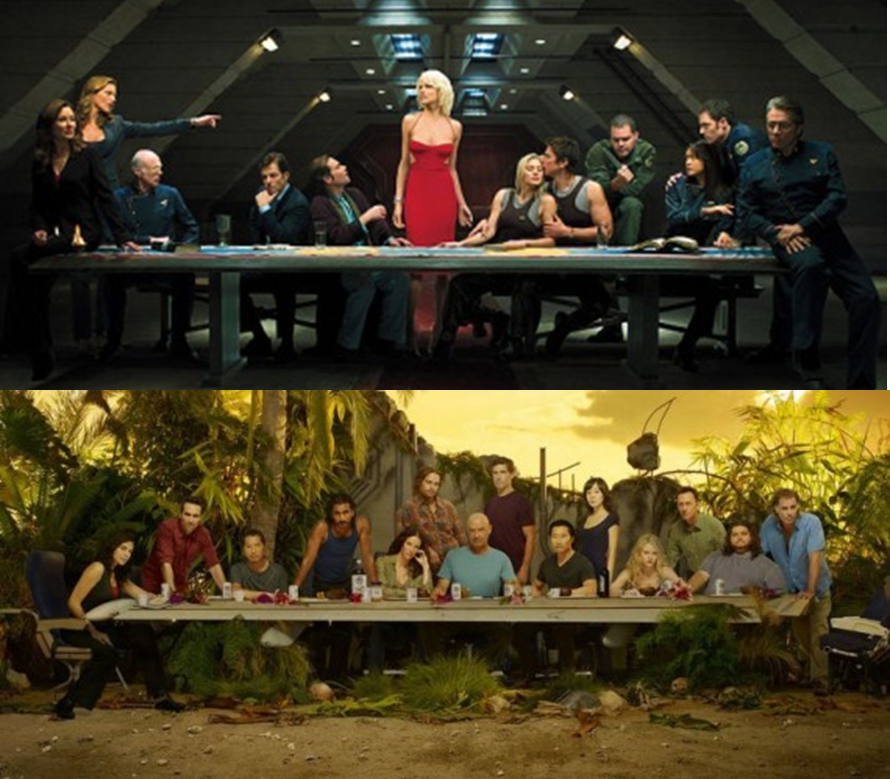 Yesterday I was listening to a podcast about last weeks crop of sci-fi and fantasy by Darren Franich and Jeff Jensen and one of them mentioned in passing that George R.R. Martin hated the ending of Lost. I hadn’t heard that before, so I did a little poking around and found an old io9 article about it by Charlie Jane Anders – who disagrees with Martin, but who also didn’t like the ending of Lost.

So, this probably goes without saying, but since I’m going to writing about the endings Lost and Battlestar Galactica– what follows will contain spoilers.

The biggest problem I think fans of Lost and BSG had with the endings is that the shows both set up slightly conflicting narrative structures. Both shows were explicitly about the characters stories, but they were also both posing that the drama was not driven only by the characters, but also by a Grand Mystery, built up of multiple related mysteries.

The drama of Lost isn’t created only by the conflicts between the characters, or some by some outside event like the crash, it is created by a series of mysteries – what is the smoke monster? What is the hatch? What was the DHARMA Initiative? Who are the Others? Likewise, BSG poses questions – How does Gaius see Six? Who are the Final Five? How did Starbuck survive and what the hell is she now?

This combination of character drama and mystery drama (combined with dramatic events) are the elements that made these shows so addictive. But it also created an inherent problem for any resolution of the storylines. Part of that problem is the conflict between character-based story resolution and mystery-based story resolution. This problem is difficult enough to resolve – because for a successful ending the character and mystery storyline need to converge so that their resolutions dovetail with one another. The more difficult problem, to me at least, is that the way the mysteries were presented, in both shows, a dichotomy was created that was especially difficult to resolve – namely that the answers to the mysteries would have either scientific or mystical explanations.

I think that tension – between science (or even pseudo-science) based explanations and mystical explanations to resolve the mysteries accounts for most of the fan dissatisfaction with the endings to both series. What many fans did not grasp, and what the writers failed to make clear, was that in these two worlds, mysticism and science were equal forces. Lost tried to makes that clear with the long running feud between Jack and Locke – between science and faith (mirrored in BSG with the relationship between Gaius and Six). Seems it wasn’t clear enough.

I think the problem was that many fans thought science would win – that the mysteries would be explained with science – like some episode of Star Trek. They were expecting to find out literally what the island was, not metaphorically. They weren’t prepared (by their lives or the writers) to be presented with the notion that the full nature and complexity of the island was beyond the limited comprehension of humans. The writers tried to prepare us for that with the largely fruitless science based investigations of the DHARMA Initiative, but it clearly wasn’t explicit enough for most fans.

So, when the nature of the island is explained metaphorically, literal minded fans feel cheated. And when the smoke monster is not some nano-bot cloud but the result of Jacob’s brother being directly exposed to the light energy at the heart of the island – those fans hoping for a science based rather than mystical based explanation are disappointed. They thought they were watching science fiction not fantasy. But, Lost was always both.

And so was BSG. When Starbuck returns from certain death, science loving fans were looking for a science based explanation. When she simply disappears in front of Apollo at the end, it confounds any rational explanation. And it leaves all the questions about who/what she had unanswered. Or, if you are like me, it forces you to consider possible answers that you hadn’t before (like her presence being the result of some god or god-like alien’s involvement in the affairs of lesser beings).

So, because several of the stories I plan to write encounter these same structural problems – plots driven by mysteries that are rooted in both science and mysticism, I’m wondering what lessons I can learn from the endings of these two series.

First, it must be said, if one hadn’t guessed, that I was one of the people who were thoroughly satisfied with the ending of Lost. Immediately after watching the final episode I felt intellectually, emotionally, and even spiritually satisfied.

My spiritual satisfaction came from watching the characters realize what I thought was the essence of the finale, and a potent spiritual teaching. As the characters become aware that they are dead, that they are in some middle place, a purgatory or bardo of some sort, a place of their own creating, they have a realization. That real realization is crystallized in the final scene between Ben Linus and John Lock. They realize they do not have to be the people they were. They understand that they were like actors in a play, pretending to be these characters with all these flaws and problems, filled with anger and hatred and fear, and finally, they can let go of all of that a just BE.

That is such a profound lesson to me. It is a lesson I keep trying to remind myself of. This life is like a play (or as Buddha said, like a dream). I don’t have to play the role of a person filled with anger or hatred or fear (delusions). I can drop that mask and all the other masks and just Be.

I also loved the ending of BSG. When Starbuck disappeared, I didn’t feel cheated, I felt liberated. As, I said, I suddenly considered possibilities that I hadn’t. The notion of some alien source for Starbuck’s temporary return. Or was it simply the god of the cylons? Or the gods of the humans? I suppose my reaction was tempered by personal experiences (which I may write about one day) that defy scientific explanation and the laws of the universe (at least as we currently understand them).

For me, the endings of both series made perfect sense, but early on in both, I had recognized and appreciated the blending of science and spirituality, the meshing of mysticism and empiricism, of faith and logic. I don’t see those things as separate and at odds with each other, so I my expectations were fulfilled rather than thwarted. I wouldn’t have changed anything about the endings, I would have changed small details along the way that would have made the endings more resonant.

So, again, because so much of what I plan to write will involve mysteries that revolve around mysticism and science, what lessons can I take from these series and their endings, and the ways many fans reacted to them?  Endings are about the structure of the story. About the elements being assembled in their final form.  So, choosing what those elements are, and how they are used, is essential.

First – if the plot and story will be driven by mysteries as much as characters and events, make it clear what those mysteries are rooted in. Are they rooted in science with scientific explanations, or are they more fantastical, with explanations verging on the mystic or the spiritual? If one is going to have more weight than the other in resolving the story and plot lines, make that clear from the beginning and reinforce it explicitly (as well as metaphorically).  If they are both going to have equal weight, that needs to be clear as well, and that balance should be expressed in the resolution.

Second – Prepare the audience/reader for the ending, even if it has a surprise twist. Make sure that your ending is hinted at structurally and metaphorically so that the audience/reader doesn’t feel like the a rug has been pulled from underneath them, but rather, that they suddenly realize what they have actually been standing on for so long.

Third – If one or more of the mysteries driving the plot isn’t going to be explained explicitly, or is going to be explained with an answer that raises more questions, lay some groundwork for that well ahead of time. Make that kind of ambiguity and complexity central to the story and the character’s lives. Set up the presentation of questions leading to more questions rather than final answers as a benefit and feature of the story as a whole.

I’m sure there are more lessons to be learned and I’m sure I will learn some of them by making a few mistakes, but for now I’ve found this little exploration into the endings of two of my favorite series very helpful in thinking about the endings to the series I hope to write.