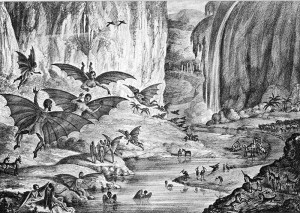 I came across this article today about a life-on-the-moon hoax published on this day, 176 years ago in the New York Sun newspaper.  The paper ran a six part series about red cucumber eating bat-men living on the moon and worshiping in temples. Somehow I had never heard of this hoax. Which is a shame, because I love kooky stuff like that.

The New York Sun was a penny paper specializing in salacious stories (think The National Enquirer). The paper ran a story with discoveries ascribed to Sir John Herschel, one of the most famous astronomers of the time. Herschel had gone to South Africa in 1834 to build a telescope in Cape Town. The paper’s reports were supposedly his observations as published in the Edinburgh Journal of Science – which didn’t exist.

“We counted three parties of these creatures, of twelve, nine and fifteen in each, walking erect towards a small wood… Certainly they were like human beings, for their wings had now disappeared and their attitude in walking was both erect and dignified… About half of the first party had passed beyond our canvas; but of all the others we had perfectly distinct and deliberate view. They averaged four feet in height, were covered, except on the face, with short and glossy copper-colored hair, and had wings composed of a thin membrane, without hair, lying snugly upon their backs from the top of the shoulders to the calves of their legs.

The face, which was of a yellowish color, was an improvement upon that of the large orangutan… so much so that but for their long wings they would look as well on a parade ground as some of the old cockney militia. The hair of the head was a darker color than that of the body, closely curled but apparently not woolly, and arranged in two circles over the temples of the forehead. Their feet could only be seen as they were alternately lifted in walking; but from what we could see of them in so transient a view they appeared thin and very protuberant at the heel…We could perceive that their wings possessed great expansion and were similar in structure of those of the bat, being a semitransparent membrane expanded in curvilinear divisions by means of straight radii, united at the back by dorsal integuments. But what astonished us most was the circumstance of this membrane being continued from the shoulders to the legs, united all the way down, though gradually decreasing in width. The wings seemed completely under the command of volition, for those of the creatures whom we saw bathing in the water spread them instantly to their full width, waved them as ducks do theirs to shake off the water, and then as instantly closed them again in a compact form.

The Museum of Hoaxes has the full text of the articles. A fun read.

There is even a book about the whole incident that looks to be a fascinating read.