The final launch of the Space Shuttle program. A sad day for space geeks and kids dreaming of becoming astronauts. For the next several years, until the Aries replacement launch system becomes operational, the US will be paying Russia to ferry astronauts to the international space station. How’s that for irony? Who would have thought that the country that put men on the moon and created the first reusable launch system would end up asking their former rivals to launch their astronauts into space using rockets that are largely unchanged from those used during the 70s.

Of course part of the problem is that the shuttles are 70’s technology as well. And there was not a really solid plan in place to get another system online before they were retired.

There is a interesting article at Foreign Policy that explains where state of various space programs around the world.

And another at Slate that has a picture montage of NASA’s Space Camp. 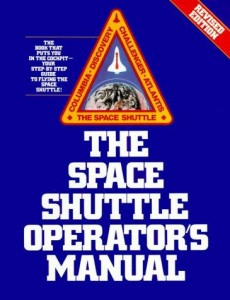 I never went to space camp, but I would have loved it. When I was a kid I read everything I could find on space travel and NASA and the Space Shuttle. I had a copy of The Space Shuttle Operator’s Manual and I read it cover to cover several times. I daydreamed about visiting my cousins in Florida and somehow managing to stowaway on a Shuttle Flight. Fortunately, my best friend convinced me that idea was dangerous and unlikely. That was his subtle way of saying “moronic.”

I got so nostalgic thinking about that manual last night that I bought a copy on Amazon for a penny (plus shipping of course). I was elated at the bargain, but the price is, I think, linked to the US’s lack of interest in space travel, which is probably the biggest cause of the demise of the Shuttle Program and the general malaise of the US space flight program and a sad portent of its future.