Game of Thrones Season One 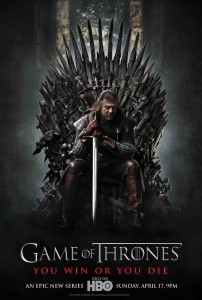 I finally got around to watching the final episode of the First Season of HBO’s Game of Thrones.

(Note: Neither the TV show or the book of Game if Throne is young adult appropriate.)

One of the biggest advantages the writers and producers have is that they are very closely following the plot of the novels (or at least the first novel). This is also their biggest weakness. Characters that we have come to like end up dead at the hands of characters we have come to loathe.  But, that is part of George Martin’s theme in the book series – good people who do the moral and noble thing are often killed or destroyed by immoral people who do wicked things. Sometimes the motivations of those wicked people are morally black and white and sometime they are morally gray.

While that may be an accurate depiction of how the world works, as a reader and a viewer, it can be frustrating. I’ve read the four novels in the Song of Ice and fire series so far and I expect to read the fifth one, which is finally coming out after a nearly seven year pause. And while I have enjoyed the novels enough to keep reading them, there are some chapters that I read faster than others. I don’t have much personal patience for time spent with morally challenged characters (Cersie for instance) or characters that strike me as impossibly stupid (Sansa for instance). I suppose this is why I don’t enjoy watching movies or TV shows about organized crime. I can’t identify with the lead characters and spend too much of the time hoping they will get killed. I spent much of the time watching Game of Thrones hoping certain characters would get killed, suspecting they wouldn’t because they didn’t in the novel, and hoping that the characters I liked from the novel would somehow survive. I’m being vauge because I don’t think I need to spoil anything.

But if you like complex plots and complex characters, some who are repugnant to spend time with and others who are just plain annoying, then I highly recommend the show and the books.