Unpublished Prologue for Wizard of Time #3 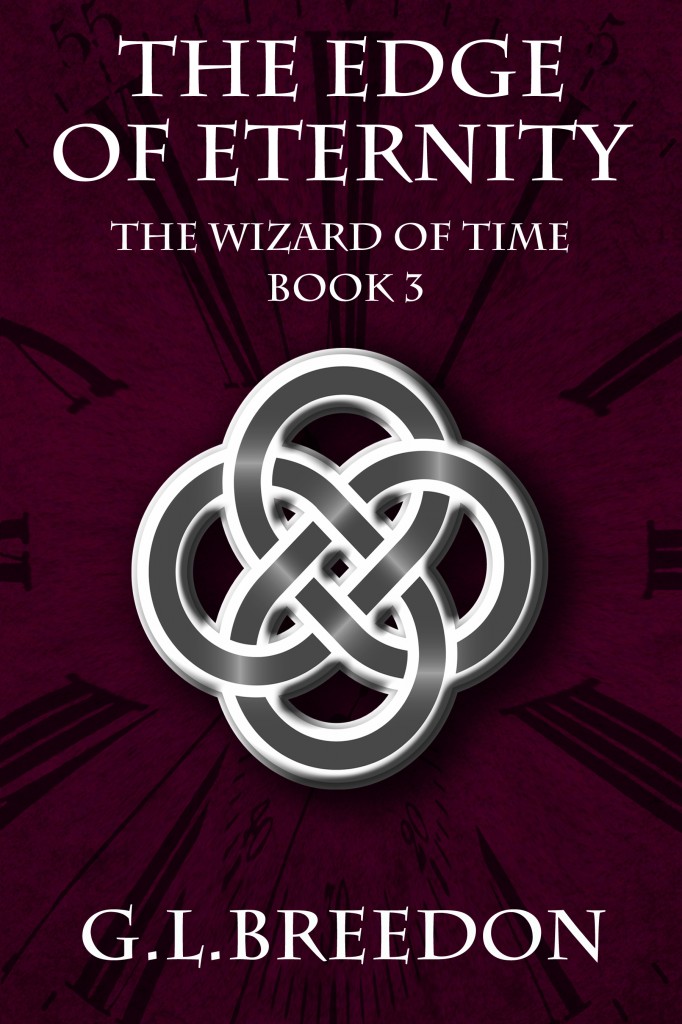 With The Edge of Eternity (The Wizard of Time – Book 3) coming out next week I thought I’d post a few related things this week.

Below is a prologue that I had originally written for the novel, but decided to cut as it wasn’t absolutely necessary. However, it does set up the external story a bit, and I figured folks might like to read it anyway. It’s not as thoroughly proofed as the novel, so please forgive any typos.

Unpublished Prologue for Wizard of Time #3 :

Low clouds concealing the half-moon part for a moment and reveal six massive Doric columns on the western side the Brandenburg Gate.  Facing east, in the center of the long, flat stone roof sits the quadriga — a statue of four horses pulling a chariot, driven by Victoria, the Greek goddess of victory.

Electric lights below illuminate the barbed wire atop the Berlin Wall, separating Communist East Berlin from the Democratic West Berlin. Soldiers at the checkpoint rub their hands together for warmth in the late autumn air. Their eyes focus on the wall, on the ground, and on each other, but never upon the 17th century monument behind them.

A man appears out of air and nothingness atop the wide, flat roof of the gate. He wears a well-tailored black uniform, a red embroidered infinity sign emblazoned above his right breast. The man looks around, his gaze rising to the sky where clouds merge once more, blotting out the light of the moon. He glances below at the soldiers then turns as the shadows behind him come to life.

Two more men in black step from empty air into the night. Two men who appear identical in every way.

“I did not sense your arrival.” The first man looks slowly and cautiously between the other two. A wary man confronting two dangerous animals.

“You could not,” one of the other men says.

“We did not arrive,” the man’s companion adds.

“We have been here waiting…”

“Why you have asked for this meeting.”

The first man to appear pauses before speaking, taking a moment to think, to consider the journey he is about to begin and with whom.

“I have information for you.”

“What information?” The Apollyon on the right steps forward.

“I know where the boy is.” The man swallows but resists the urge to step backwards.

“You’re mistress sends you?” The second Apollyon steps to join his duplicate.

“No.” The man takes a deep breath. “She knows nothing of this.”

“What is your name?”

“Malik. I trained the boy.”

“What do you want?” The first Apollyon squints at the man called Malik as though trying to work out a puzzle.

“I want to join you.” Malik lifts his head. “In the future. When you have destroyed the Great Barrier of Probability.”

“Why?” The two Apollons speak in unison.

“You will need soldiers in the future. Soldiers with experience.”

“Why you?” Again the Apollyons speak together.

“I want to see the future.” Malik’s gaze shifts between the Apollyons as he speaks. “Kumaradevi and the Council and all of them are the past. You and your brothers are the future. I want to be part of the future.”

“And why would you betray Kumaradevi?” The first Apollyon asks.

“If she were to discover your duplicity…” the second Apollyon adds.

“Her wrath would be…”

“It is she who has betrayed me.” Malik’s eyes narrow. “I was loyal to her for decades and she demoted me because of that boy. I trained him and then she expected me to serve him.”

A faint smile curls across the twin mouths.

“Someone betrayed us.” Malik turns and spits. “Someone gave the boy a talisman of great power. It was not my fault. And the same after the attack on the castle. She punished all of us regardless of rank.”

“It sounds as though…”

“You fail her regularly…”

The Apollyons step even closer to Malik.

“We have been following him.” Malik’s feet fall back a pace under the intensity of the twin Apollyons’ stares. “After the attack on their castle the Empress…Kumaradevi sent teams throughout the Continuum looking for clues to find the boy, to hunt him down. My team found him.”

“I found the boy.” Malik licks his lips. “We attacked. To kill the boy. To regain our lost standing in the Emp…Kumaradevi’s eyes.”

“You failed,” the Apollyons say as one.

“Yes.” Malik clenches his fists. “He was better prepared than we, than I, anticipated. But we followed him. Ghosted his trail through time for a week, hoping he would return to their new base, thus giving us another chance to regain favor with Kumaradevi.”

“Where their new base is at?”

The Apollyons step forward. Again, Malik falls back a step.

“No. No, he never returned to a base. He and his team are looking for something. Investigating something. I think it has to do with the Great Barrier. ”

“And in return for this information…”

“You wish us to join us in our quest?”

The Apollyons are silent a moment, their eyes locking as they seeming to listen to voices unheard in the cool October air. As Malik holds his breath, the Apollyons turn in simultaneous motion toward the Dark Time Mage.

Malik releases his breath and wipes his brow. “There is a small problem.”

“We encountered another team of Kumaradevi’s soldiers yesterday.” Malik looks down a moment before raising his eyes to the men before him. “They have joined us. To take the boy, you’ll need to fight his people and mine.”

…The eyes of the man named Malik.

Malik glances past the Apollyons to the statue of the Greek goddess driving the four horses of her chariot toward the east, toward the sunrise that is beginning to tint the clouds a pale yellow, toward the future, toward victory.

“No, that will not be a problem for me.”