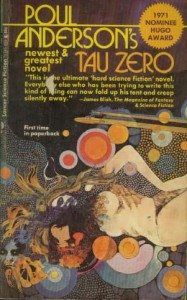 I picked up a copy of Poul Anderson‘s Tau Zero on ebay last year in a lot of mixed classic sci-fi novels. It turned out to be one my favorite novels from the last few years.

The crew of an interstellar expedition become trapped on board in an ever accelerating Bussard ramjet, hurtling through the universe, constantly approaching the speed of light. An accidental collision with a nebula caused damage to acceleration unit of the ship and now it cannot stop. As the ship gets closer and closer to the speed of light, the relativistic effects of nearing that terminal speed mean that everyone the crew knew is dead. Eventually the crew estimates that our sun has gone nova. They are trapped in a ship that is taking them farther and father from what it means to be human.

I found that storyline to extremely compelling. I thought some of the characters were a little flat and one dimensional, and the relationship subplots a little weak at times, but the thrill of wondering what might happen next kept me turning the pages swiftly.

Unfortunately the conclusion of the novel hinges on the notion that the universe would eventually contract back to another singularity. Turns out the opposite is more likely to happen. Which is a frightening thought as well.

I also discovered that there is an organization called the Tau Zero Foundation that is working on practical methods for interstellar travel. They have a blog as well.