What I’ve Learned about Storytelling from Watching The Walking Dead

(Note: This was supposed to be a short blog that turned into a massive rant. Sorry!)

I came to The Walking Dead in the 4th season, after binging on the first three seasons on Netflix. I had avoided the show because I generally don’t find zombie stories all that appealing. However, I do like a good post-apocalyptic-end-of-the-world story, and TWD does that very well, just with zombies.

In general I’d say that the show has become one of my favorite stories. However, the season 6 finale this last Sunday, and the seven episodes that preceded it, have me rethinking that appraisal. In particular I am thinking through what I like about the show and what disappointed me so much about this season and its conclusion. More importantly I want to examine what I feel didn’t work in the storytelling so that I can avoid such things in my own stories.

Needless to say there are spoilers ahead. 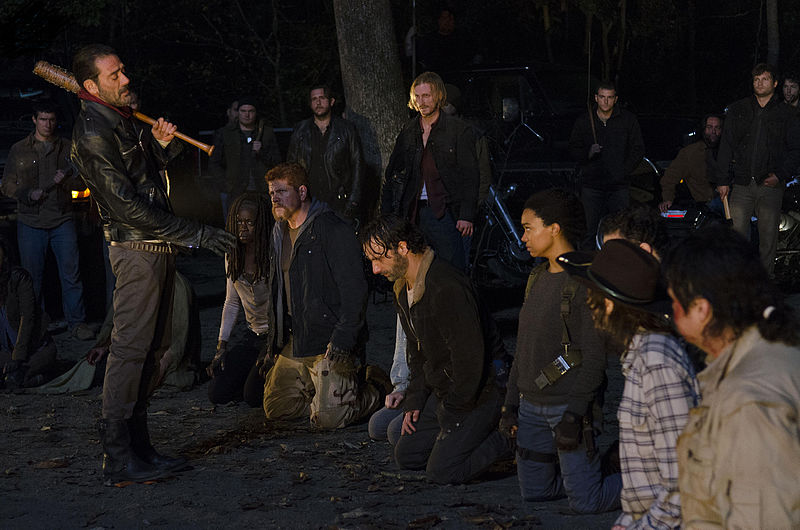 Let’s begin at the end, since that is freshest in my mind.

Even people who had no familiarity with the comics and tried to avoid spoilers online knew that Rick and his Survivors would be meeting up head-to-head with Negan and his Saviors. But having all that build up and expectation reach a culmination in a stultifying 10 minute plus monologue by the series latest villain drained, for me, the sense of danger from the moment and pushed it right to the edge of parody.

Lesson – When introducing a new character – especially a villain, less is more. And less expected is more interesting.

When Negan shows up with a baseball bat and starts pontificating, giving his villain as preacher sermon, you know someone is going to get hit in the head. The tension should be in not knowing who will get hit. It should not be in wondering when the interminable monologue, almost entirely uninterrupted, will end. This is especially true as you could cut the middle six minutes out of it and not lose anything. Don’t believe me – watch it again and fast forward when you start to feel bored.

I kept hoping as the scene when on and on that it would take some sudden turn into unexpected and unexplored genre villain territory. I had visions of Rick interrupting Negan’s long winded, digressive introduction to demand that he either whack someone or give Rick the bat so he could do it himself and get it over with. Knowing where a scene is going once it starts can be annoying enough, but it is painful when you know where it’s going and it feels like it will never get there. Hell, they could have had Negan give Rick the baseball bat or a gun and tell him to pick one of his people to kill, or Negan would kill them all. That would have been dramatically interesting and forced Rick to accept and new level of failure. And you don’t need a cliffhanger of who gets killed, just a solid scene showing how it had affected the survivors and what they intended to do about it. This is how they ended season 4 with Rick and the Survivors locked in a railway car and vowing revenge against the TerCannibals.  It left me want to see what happens next.

Lesson – Do not hint and foreshadow and proclaim a shocking conclusion and then postpone the climax. Tantric storytelling is not generally appreciated, especially by consumers of genre entertainment.

Of course what I didn’t expect was that final scene really wouldn’t end, but that it would have a cheap switch to a POV of the unlucky Rickian who got walloped and then fade out. The producers didn’t even have the decency to put “To be Continued” on the screen. The absence of resolution in the final scene left me disaffected with the story and wondering if I’ll tune in at all next season.

I’m not against cliffhangers at the end of a season of TV. I don’t like them, because they are largely a gimmick, but I have come to accept them. I prefer when a storyline has been wrapped up and then we are offered a tease of what is to come. The end of season 2 did this with a pull back to show the prison at the end on the final episode, after the destruction of the farm. A resolution and a revelation.

The season 6 six finale instead tried to reveal something (the new villain) without any resolution (“tune in six months from now to see who got killed and hope you care by then”).

Lesson – Don’t bend the rules of your world push the boundaries of believability to fit a preconceived plot point.

So the Saviors have enough people and equipment to block every road between Alexandria and Hilltop (with a massive log wall at one point) and somehow also can manage to assemble all on one spot right after Rick and the crew decide to follow Eugene’s diversionary plan to separate while he drives the RV to lead the Saviors on a wild goose chase. Firstly, how the hell was Rick planning on getting Maggie to Hilltop on foot? Find yet another vehicle with magic gasoline? What they were clearly not expecting was to walk a couple hundred feet and encounter enough Saviors to force them back to the road where they find that Eugene and the RV have been captured without a fight or a sound.

I found this excessively unnecessary because the writers could have simply had a second group of Saviors show up behind Rick and the crew at any point during the day or night. That would have been more believable.

Lesson – Don’t force your characters to do things that are out of character to achieve a preconceived plot point.

Morgan and Carol – So you have this great idea for a scene where Carol who has been the show badass resigns herself to being killed by some random asshole, (after she kills his companions), because doesn’t want to kill anymore and would rather die, and to cap it off you decide you want Morgan, who was once crazy enough to kill innocent people by mistake and who now refuses to kill even when it will save lives – has to pull the trigger and kill the guy trying to kill Carol.

The contortions there are obvious – as contorted a Morgan’s logic that by not killing the Wolves he came across before reaching Alexandria he allowed one of them to save Denise from walkers – ignoring that had he killed the two Wolves to begin with Alexandria would not have been attacked by the Wolves, innocent Alexandrians would not have died, and Denise would not have been kidnapped at gunpoint by that particular wolf and had her life threatened by walkers as he attempted to take her so he could force her to use her medical knowledge to save him.

Characters can have interesting arcs that change them, but those arcs have to make sense or the story loses believability and viewer/readers become less invested in them. Morgan’s arc makes sense (thanks to a whole episode devoted to explaining it) even if his logic is tortured in trying to maintain his beliefs. But Carol’s arc doesn’t make sense because it invalidates all the lessons she had learned over the last six seasons. She even takes the wrong lesson from her new found philosophy at the end. It’s not that she can’t be a pacifist around people she cares about because she will have to kill, but rather, as Morgan proved, in the post-apocalyptic zombie world you can only be a pacifist if you want to die, or if there are people around you who will kill to protect you.

I’m a Buddhist and a pacifist but even I accept that it is acceptable to use violence to protect yourself and others from those who are violent. To do otherwise is to capitulate to that violence and insure it spreads. Carol knew this, but the writers decided she needed to forget it so they could have a cool scene with Morgan in the season finale. Which, because it forced Carol to be and do things she would not normally do, undermined the impact of that scene, regardless of how well it was played by the actors.

I could also complain about why Daryl and Rosita would take Denise, they’re only person with medical training outside the walls when they think and attack by the Saviors might happen at any time, but the answer is that they wouldn’t, but they did so to allow the writers to achieve a series of plot points like killing someone off unexpectedly and making sure that when Maggie had complications with her pregnancy no one would be left in Alexandria with a clue of what to do.

And I could complain that Daryl would not run off alone afterward to track down Denise’s assailant, and that these assailants would not still be lurking in the same place, and that woodsman Daryl would not be surprised twice so easily and taken captive.

These are signs of writers having a plot point or scene in mind first and trying to force characters to behave in ways that get to that plot point or scene with the least resistance. The easy way is to make your characters do things that are out of character or that are stupid. The harder thing is to figure out what your character would do and shift obstacles around them to force them into a necessary plot point. Preferably the plot gets driven by honest character decisions and actions, not by contrived events and moments. What’s the most interesting thing that can happen to the character  and how will she react, or what is the most interesting in-character thing the character can do,  and what will happen? Answering these questions creates interesting drama.

This blog had turned into a rant, and has gone on far too long, but I do have at least one more lesson, and it’s a positive one this time.

Lesson – You can take a break from the action to let the characters reflect on what has happened to them, and in the process draw the reader/viewer closer to your story and protagonists.

My favorite The Walking Dead episode is Season 5, episode 10 (“Them”). Not much happens. Rick and the Survivors walk along a road and take shelter in a barn and talk about what has happened to them and what they see as a future for them. The episode moves slow and not much happens – because not much needs to. Plenty has happened before this episode and it ends with a clear signal that more will happen later (the arrival of Aaron). The episode is a reminder that if characters are well written and readers/viewer are engaged with their stories, you don’t always need action or a sense of forward momentum. Good storytelling can come from characters talking about the world they live and what it means to them, and what they mean to each other.

I’ve learned much more in watching The Walking Dead, but that’s about all II have time for right now. Maybe I’ll expand on this later or turn my lesson seeking toward another source.