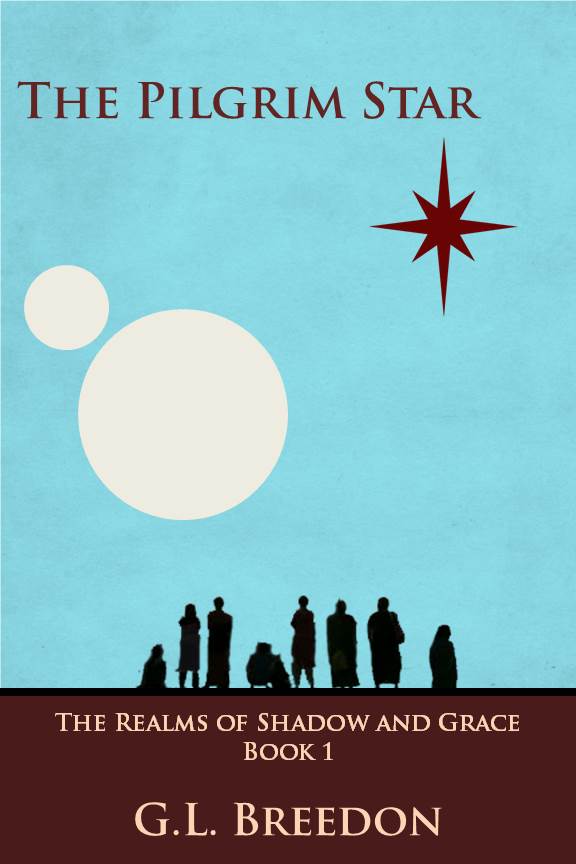 (Placeholder cover for the new novel until my wife and I have time to design a new one.)

It’s been a long time since I’ve had a chance to blog. While working on the new novel, I simply didn’t have the time, and then the day job resumed and ate up even more time.

The first draft of the new novel is finished and I’m working on editing. It’s called The Pilgrim Star and is the first installment of an epic sword and sorcery opera called The Realms of Shadow and Grace. The novel is written in seven episodes, each between 30-45,000 words long. The whole thing around 255,000 words just now, although I expect it to grow a bit as I add some supplementary material.

I’ve been thinking about and plotting this novel for the past three years while working on the YA books (The Wizard of Time & The Young Sorcerer’s Guild). It’s nice to finally be telling a story for adults on a large canvas.

I’d always planned on writing the story in large episode-like chapters, but wasn’t sure how to proceed. I envisioned some cross between Lost and Lord of the Rings. However, the success of the guys at Sterling and Stone in writing episode based fiction, structured like the episodes of a TV show, convinced me it was not only possible, but the best way to tell the story I had in mind. I’d describe it now more as Lost meets Game of Thrones. By which I mean it has a large cast with seven story arenas, and that while each episode features a primary and secondary storyline, every story arena gets some page time in each episode. In some ways a better comparison is Game of Thrones the Novel meets Game of Thrones the TV Show.

Reading the fourth and fifth GOT novels also provided inspiration. While I enjoyed the story, by the time I got to the end of the 800+ pages of the fourth novel only to discover that many of my favorite characters had not made an appearance, I felt cheated. I decided that there must be a way to tell a complicated story with a large cast on a vast scale, and still always find stage time for all the storylines. I think I’ve managed to do that.

Below is a brief synopsis of the story.

Tens of thousands of humans and other peoples throughout the realms are dreaming the same dream of the birth of a new star — a dream that foretells the resurrection of an ancient temple and heralds the arrival of a new god — a dream that instigates a pilgrimage to the Forbidden Realm and sparks a religious war that engulfs the lives of seven groups of unique people.

A priestess abandons her temple and faith to become a prophet and lead a pilgrimage across nations and oceans in search of the new god who speaks in her dreams and through her voice.

A prince turned monk must assume the throne of a dominion breaking under the weight of decades of sectarian religious war with its neighbors.

A seer, a woman able to perceive the true nature of reality and bend it to her will, finds herself in possession of an ancient book written in an unknown language and pursed by those who will kill to possess it.

A man with demons in his past, hiding in the woods, finds himself protecting a woman and a young girl from a band of soldiers intent on killing them both for reasons they will not divulge.

A scholar from a reptile like species called the Rakthor travels with a band of pilgrims carrying a stolen ancient mechanical artifact of the Urris, the first people of the world, the ones who enforce the ban on all who would attempt to enter the Forbidden Realm.

Three non-human scouts from three different realms hide within a carnival as it follows a band of pilgrims. The scouts try to discern the meaning of the dreams, the prophetess, the pilgrims, and what they all imply for the rulers of their respective lands.  When the group of travelers is caught between the armies of the sectarian religious war, they must abandon their mission in order to save a town and their fellow travelers.

An incredibly old man who cannot seem to die awakens each day in a different place in the world, drawn inexplicably to important people and events that he diligently records in a small, leather-bound book which always contains another empty page. The old man always awakens alone, no matter who might have been nearby the night before – until the day he wakes to find the young, mute boy he met the night before has traveled with him.

As pilgrims heading for the western coast of the Iron Realm risk murder at the hands of militias hunting heretics and bandits seeking easy prey, nations will go to war over long held personal and religious feuds and a new god will make herself felt in the world through inexplicable miracles. The high will fall, the low will rise, the sun will bleed, and the moons will weep as turmoil engulfs the whole of Onaia in The Reams of Shadow and Grace.

Obviously that’s a little wordy for the book blurb, but I figure I’m got a few months to whittle it down a bit. At this point, I’m hoping that I can manage to edit one episode a month. I’m not yet certain if I’ll release the individual episodes before I’m happy with all of them. I’m also not entirely certain what sort of release pattern I’ll eventually adopt.

Anyhoo – that’s what I’ve been up to. Writing and then working the day job and trying to edit at night. I’m also in the final proofing stages for my nonfiction book The Alchemy of World and Soul. I’m hoping to have it out at the end of the year or the beginning of 2015.

And hopefully I’ll find some time for actually blogging in the next few months.