An Integral Theory for Novel Writing 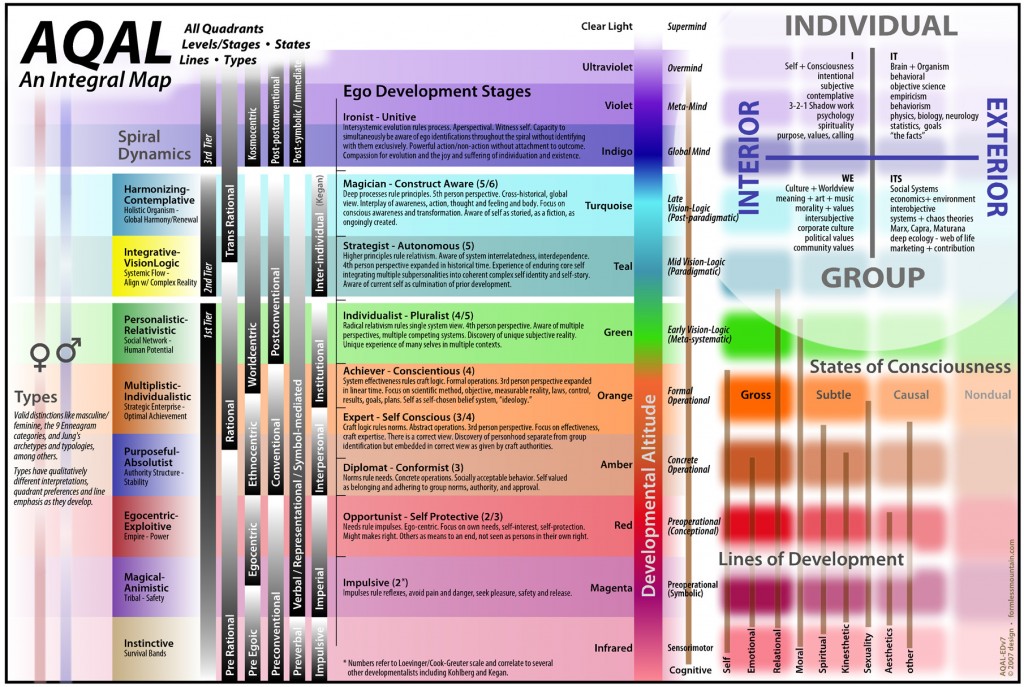 Back in 2003, after I had finished writing the script for Dark September Rain I wrote some short notes on how to take Ken Wilber’s Integral Theory and apply it to theatre. The plan had been to stage Dark September Rain as a play for a few weeks before shooting it as a film. Eventually I dropped this idea, both because the actors seemed more enthusiastic about the film version, and because I really couldn’t afford to do both.

I came across the notes the other day while checking something on my Chrysalis Age website and thought that it might be interesting to apply the same integral ideas to writing novels.

A little background on Integral Theory is probably helpful. I’ve written about it briefly before.

At the center of Integral Theory is a chart Wilber calls the quadrants of knowledge that outlines the relationships between the different areas of understanding. Wilber builds on the idea of holons by Arthur Koestler. A holon is both a thing unto itself and part of a whole. Wilber then arranges the different holons of the cosmos into quadrants. The quadrants are created from the intersection of two dichotomies: the interior/exterior and individual/collective. This presents four areas: individual interior (psychological), collective interior (cultural), individual exterior (physical/behavioral), collective exterior (physical/social). He then further extends levels of development within each quadrant (atom, molecule, cell, organs, bodies, etc.). You can see the chart below for a better idea of what I’m describing (from Kheper.com ).

So, quadrants of being and levels of being. Wilber calls this an All Quadrant All Level approach.

The question then becomes, how can I use these different aspects of being to strengthen my storytelling. First it’s might be helpful to look at how this All Quadrant All Level approach might apply to the different aspects of creating as novel.  The primary aspects are Story, Character, Setting, and Plot.

So, based on that a few thoughts:

Now, with all this in mind, what techniques can be used to create a novel in an Integral fashion? How do you simultaneously, or in sequence, approach the different levels (physical, instinctual, emotional, intellectual, spiritual) of story, character, setting, and plot?

Possible Writing Approaches to Levels of Being

These notes are intended to spark thinking. Mostly my own. They are not presented as some over-conceptualized system of writing novels. It’s more a sketch of a path rather than a map of a path. That said, I think it’s a useful sketch. At least for me. I can see that I will probably expand it as I think about it over time, especially as I begin to apply it to the writing of Wizard of Time #2.

Hopefully, others will find this helpful as well.