The Way of Kings – Review 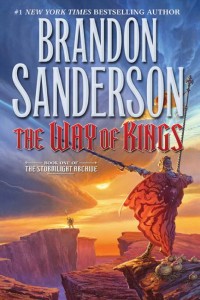 I finally finished Brandon Sanderson’s The Way of Kings last week. It took me months to get through the book. Part of that was because I was so busy indie publishing The Wizard of Time and The Dark Shadow of Spring. I was also writing the sequel to The Dark Shadow of Spring. So some of the reason it took so long to finish was because I had so little time for reading over the summer. The other reason is that the novel is nearly 1000 pages long. However, the main reason is that the story is told with such a slow pace for the first 500 pages that I felt it hard to immerse myself in it.

Although there are digressions, The Way of Kings is largely the story of three character’s stories: Kaladin, a soldier betrayed and sold into slavery; Shallan, a young woman trying to save her family by betraying her mentor; and Dalinar, a high prince who is possessed by near psychotic visions imploring him to unite the kingdom.

I enjoyed all three characters, and they each have an interesting story, and by the end, it can be seen how these stories will begin to interrelate, but the problem is that the…story…as…a…whole…moves…so…slowly…that..zzzz.

Sanderson has created an intriguing and original world with a unique magic system, fascinating weapons, interesting people and ethnic backgrounds, and frightening creatures. The problem, for me, is that he unveils the story at such a glacial pace that it begins to feel like the world building is dominating the story telling. This is not what is happening, the world building is not intrusive, but the story of the characters moves so slowly that it feels like the story of the world is more important. At least until around page 500. Then things begin to move quicker – but they move quicker for another 500 pages.

I couldn’t help thinking about Peter F. Hamilton and his Void series and his Night’s Dawn series. He manages to tell big stories with many characters and still keep the pace rocketing along. The Reality Dysfunction has three times as many characters and storylines as The Way of Kings, but it seems like five times as much happens in the same number of pages.

While I loved the characters and the world they were in and I thought story was ultimately fascinating, it just took far too long to getting going. I am looking forward to the sequel, but I’m hoping that it is either half as long, and that the story moves twice as fast.