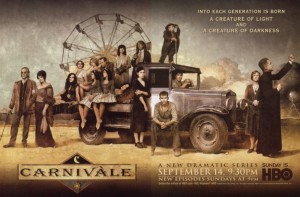 My wife and I recently finished watching the HBO series Carnivàle. A carnival plays a central part in the second book of my Young Sorcerers Guild series, so I thought watching a show about a carnival might be a fun way to do research.

Carnivàle takes place at the height of the Great Depression and tells the story of Ben Hawkins, a young man who has recently escaped from prison for murder and returned to the bedside of his dying mother – a mother who refuses to let him touch her. We soon learn that she believes Ben to be possessed by demons and dark powers – because he can heal with his touch. His mother dies and as he is burying her (and his house is being bulldozed by the bank) a carnival arrives. The leader of the carnival is a dwarf named Samson – who offers to take Ben with them. Samson offers, because he gets his orders from Management. No one but Samson is allowed to see Management, but all of Management’s decisions are final.

Thus begins one strand of the two pronged storyline. In the second storyline, Brother Justin is trying to help the migrant workers flooding into southern California. He too possesses powers, the ability to see into the dark recesses of people’s souls and to make them see things that are not there. He struggles to create a church for the migrant faithful even as he wrestles with the dark forces within him.

Naturally these two stories lines are on a collision course from the start. As the story progresses, we meet more of the carnies, like Sophia and her psychic-fortunetelling-paralyzed mother and Jonesy, a former baseball player who had his kneecap broken when he crossed the wrong people. Ben soon discovers that his father was once with the carnival. It also becomes clearer that he and Brother Justin are polar opposites, one an embodiment of light and one an expression of darkness, both driven to destroy the other.

Carnivàle is a bizarre mixture of faith, religion, magic, mysticism, vulgarity, and drama that is extremely well written, gorgeously produced, and generally directed with style and energy. My only complaint is that the whole show had such a presence of the supernatural, that when considerable time was spent on character stories where there was no supernatural element, those stories seemed to drag. But maybe they were intentional padding to give audiences a break from the intensity of the rest of the stories.

My wife and I found the show so powerful on a subconscious level, deeper than mere emotions, that we could only watch one episode an evening. This from people who watched the whole first season of Dexter in one sitting. To cleanse our palettes, we would follow an episode of Carnivàle with one of Waking the Dead – the grisly UK drama of cold case murders. Oddly, even though there was more graphic violence, Waking the Dead felt more tame.

HBO made the unfortunate and inexplicable decision to cancel the series after only two seasons, so there are only hints of what the Carnivàle might have become, but I was entranced by what little of the story I was able to watch. Had the producers of the show known they were not coming back for a third season (of an originally projected six) I suspect they could have edited the final episode to be a true season finale. As it is, the show ends with new questions that will forever be unanswered. Maybe, in a way, that is fitting.  Carnivàle is about powerful forces beyond sight and normal comprehension battling for the future of human souls – no true final answers can arise from such a battle – only more endless questions as the eternal struggle between darkness and light plays out.