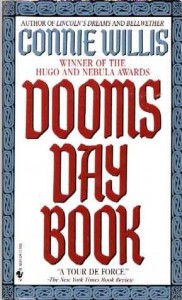 The winners of the 2011 Hugo Awards were announced over the weekend. Founded in 1955, the awards are named for Sci-Fi legend, Hugo Gernsback, publisher of Amazing Stories among many other magazines.

Connie Willis has won the 2011 Hugo Award for best novel for her two volume travel novel, Blackout/All Clear. While I haven’t read her new novels, I recently finished her time travel novel Doomsday Book. I thought a short review of Doomsday Book might be in order.

Named for the medieval census ordered by William I, called the Domesday Book and completed in 1086, Connie Willis’s Doomsday Book is a time travel story, but of limited scope.  Kivran Engle, an young historian specializing the medieval period, is sent back to do research in the year 1320. As one might expect, things go wrong. Firstly, before even setting off for 1320, Kivran contracts a deadly influenza virus that leaves her delirious upon arrival. Locals take her home to nurse her, leaving her unable to remember where her drop point is. To get home, she must find it. To complicate matters, there was an error when she was sent back and she is in 1348, with the Black Death sweeping the countryside.

The story alternates between Kivran’s attempts to get home from the past, and her mentor, Mr. Dunworthy’s attempts to discover what went from with her “drop” while navigating the effects of a deadly influenza epidemic in the future.

While I found I really liked Kivran and loved her story in the past, the parallel story of Mr. Dunworthy was ploddingly slow and hindered by characters that I didn’t care nearly as much about as Kivran herself. I can see how the parallel stories of epidemics in the past and the future could have worked dramatically, but the obstacles that Dunworthy faces are largely bureaucratic, and while frustrating, not exactly riveting drama. Had the story stayed in the past, focusing on Kivran’s attempts to find her place in time and deal with the deaths of the people who had cared for her, I think I would have loved this novel. As it was, I felt it was half brilliant, half boring.