The Name of the Wind/ The Wise Man’s Fear 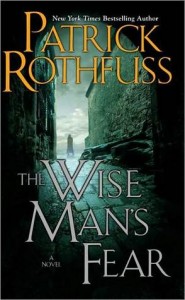 I finished Patrick Rothfuss’s The Wise Man’s Fear a while ago. Before I write about that I should write about The Name of the Wind, the novel that precedes it in his King Killer Chronicle.

I loved The Name of the Wind. LOVED IT. I hadn’t read a novel that I enjoyed that much in ages. I know there are those who don’t like it. Really don’t like it. Those that think that Kvothe, the main character, is too much of a Mary Sue, that the fantasy world wasn’t detailed enough, but I don’t care. Yes the plot wanders. Yes it’s more of an episodic journey, but I so enjoyed that journey. Mostly because of Kvothe. Because he is a character that I enjoy spending time with. Moreover, he’s like John Chriton of Farscape for me in some ways, a character that I would want to be.

So, with all that love, I was expecting to love The Wise Man’s Fear just as much. Unfortunately, I didn’t. I stilled really enjoyed it. But it lacked a structure that could keep me pulled in.  The episodic nature of Kvothe’s story, and it’s lack of a sense of progress, made it less enjoyable this time around. Part of that may have been the length. I’m not sure why Rothfuss insisted on this being a trilogy, when The Wise Man’s Fear clocking in at nearly 400,000 words could have easily been published in two volumes.  Doing so would have made for a better read I think. Because at the end of the novel it didn’t feel like there was much progress toward the goals and questions that have been at the center of the story since the beginning. I know Rothfuss has written the next novel and is revising and editing it, but I can’t believe he can wrap the whole story up in just one more volume.

So, those misgiving aside, and with the hopes of a more structured plot, I am definitely looking forward to the conclusion of the story.