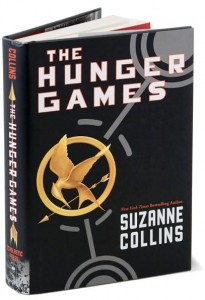 I finished Susanne Collin’s Hunger Games this weekend. I know, I’m a little behind in my reading. It seems everyone has read it. Especially now that it is being made into a film.

I liked it a lot. Not as much as I wanted to, but quite a bit. The choice to write the story in first person reduces the tension of the story, because it’s obvious that our Heroine, Katniss Everdeen will survive, but telling the story in the present tense gives every scene a forward momentum that and dynamism even when there isn’t much really happening. Which is the first third of the novel, really. That setup lasts a little too long for me. Not the portion before the Reaping, the event where Katniss finds herself in in the “games,” but later when she is taken to the capitol and prepared for the games. I think the reason it felt long was two fold, first because I knew that something more exciting with real emotional stakes was coming, but also because I didn’t get a clear enough picture of the capitol society to make be suspend my disbelief in human nature to buy into the basic premise of the story.

The basic premise is that after a social cataclysm, society had rebuilt itself around the Capitol city and 13 districts. The history is a little fuzzy. The districts clearly wanted some greater freedom and representation. They rebelled. The capitol fought back. District 13 was destroyed completely. Now every year for nearly 75 years each of the remaining districts must offer a “tribute”, one boy and one girl between the ages of 12 and 18, to fight to the death, braodcast live for the entire nation.

The problem I have is that the capitol society seems to have an extremely advanced technology. And I find it hard to imagine that this society could be so morally bankrupt that they would enjoy watching children kill each other. Or if they were that morally empty, they would want to see it all the time, not just once a year. I’m also not clear on how keeping the 12 districts impoverished helps the people of the capitol.  And why does a society with such advance technology need District 12 to mine coal?

However, once I was able to let go of those kinds of questions and enjoy the story being told, I was fully gripped by it. Katniss seems clueless about relationships, but she is such a compelling and strong willed character that it impossible not to root for her. And to wonder what happens to her in the next novel.