Introduction to The Alchemy of World and Soul 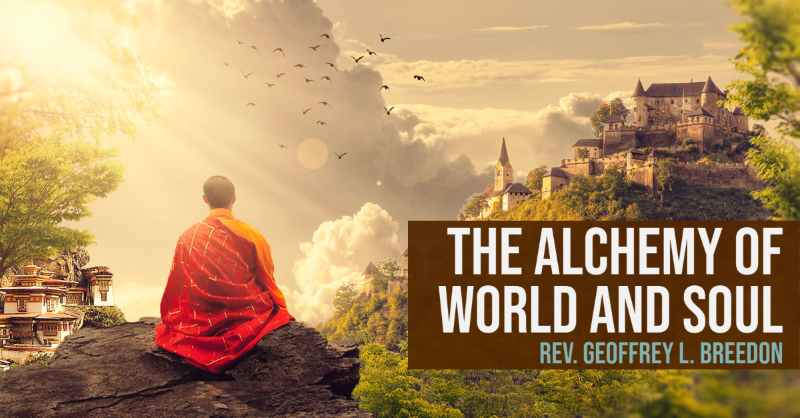 My nonficton book The Alchemy of World and Soul will be on sale for free at Amazon later this week, so I thought I would post the introduction to the book.

In its transformation from an earth-bound leaf eater to a gossamer-winged swallowtail, the caterpillar must first go through a transitional, or chrysalis, stage. From the outside, it would appear that this small creature, wrapped in its cocoon, is merely hibernating. In truth, this shape-shifting insect is undergoing an enormous transformation on both a structural and cellular level. When it emerges from its protective envelope it will have changed from a multi-legged larva into a multicolored butterfly, seemingly as light as the air it floats upon.

Our world is currently entering into its own chrysalis stage of transformation. Humanity is slowly shedding the tight-fitting skin of modernity and the vestigial trappings of the traditional world that preceded it for a more integral and complete way of seeing and being in the universe. As with the metamorphosis within the caterpillar’s cocoon, we can expect this transformation to be radical, extensive, and violent. It will be a simultaneous transformation of ourselves and our world that will extend over much of the coming century, if not beyond it.

The notion that the human species is experiencing a significant period of change, affecting not only its various cultures and societies but also the very world we inhabit, is not new. Many writers have compared this change to the one that swept through Western Europe in the 15th century. Although the comparison between the Renaissance and the world we are rapidly creating is illuminating, it is not entirely accurate. The Renaissance, as the word itself indicates, was a rebirth. We are not rebirthing some world we have seen before. We are producing something entirely different, but yet not separate, from the world of our past. The world we are constructing is a result of the world we have made over the last century, and which we continue, largely blindly, to fashion each day. Our world has always been integral, but we are adding layers of connections and levels of complexity to it at an unprecedented rate.

We are immersed in the initial phases of a new age — a Chrysalis Age — a period of transformation that, by the end of the 21st century, will leave much of our world unrecognizable. Our success as a species in coping with this incredible transformation will depend largely upon our ability to distinguish how our worldview, our way of understanding the universe, informs and directs the course of human affairs. By understanding how we can transform our worldviews from the shallow ways of seeing, which are indicative of the traditional and modern perspectives to the deeper ways of knowing that are available to each of us, we will be able to transform the world in a consciously creative manner. Although we are in a Chrysalis Age, there is no guarantee we will manage a successful metamorphosis into a global civilization resembling the metaphoric butterfly. Unlike the caterpillar, we cannot afford to rely upon nature’s hand to guide us toward a more beautiful form. Without conscious guidance, personally and collectively, we are just as likely to emerge from the chrysalis a deformed, maggot-like creature as a brilliantly tinted monarch.[i]

Alchemy, the metallurgical and metaphysical art of transmutation that found its birth in the Middle Ages and its flowering in the Renaissance, was also about transformation. The physical goal of alchemy was to transform base metals, such as lead, into gold via the creation of the mythical Philosopher’s Stone. As psychologist Carl Jung was first to point out, alchemy was a study of, and metaphor for, transformation of the self. In their obscure and arcane texts, alchemists explored the deeper meanings of separation and union throughout the universe, from the dichotomy of the male and female to the unity of Nature and the Divine. But, as the scientific paradigm came to dominate our worldview, the metaphysical investigation at the heart of alchemy was lost. As Jung explained, “With the decline of alchemy the symbolical unity of spirit and matter fell apart, with the result that modern man finds himself uprooted and alienated in a de-souled world.”[ii]

The short essays, contemplations, and meditations that comprise this book are an attempt to rectify that “de-souling” of the world in some small way. The book is divided into several sections, each exploring information and ideas relevant to spiritual and global transformation. The first section, Spirituality and Globalization, examines the relationship between these two modes of transformation and their impacts on our future. In the second section, Understanding Our World, the various aspects of our world are briefly surveyed — from the physical and natural spheres, to the human spheres of cultural conflict and global economics, to the rapidly advancing technologies of genetic engineering, computers, robotics, and nanotechnology. Each of these short essays is followed by a guided contemplation that attempts to actively deepen the reader’s perspective in regards to the particular topic.

This book is an effort to provide a new sort of alchemy for our bourgeoning Chrysalis Age. Like those ancient alchemical texts, it attempts to provide a means of transforming the world and the self by exploring the illusion of separation between person, cosmos, and the Divine. By providing an Integral path toward the transformation of self and world, hopefully a more complete understanding of both will arise.

[i] I’m not the first to use the metaphor of the chrysalis to describe the transformations that our world is headed for. Independent scholar L. Robert Keck also uses it extensively in his book, Sacred Quest. Keck describes three main stages of the evolution of human consciousness, or in his terms, Soul. The first epoch corresponds to the period from 33,000 B.C. to 8,000 B.C., while the second is from 8,000 B.C. to the present. He then suggests that we are rapidly progressing into a new stage of evolution, a “Chrysalis Stage,” of the maturation of the human Soul. While I agree in general with this proposition, as the course of this book will make clear, I also disagree on many of the specifics.

More excerpts from The Alchemy of World and Soul can be found here:

The Alchemy of World and Soul is available at: