Where Science and Religion Can Be Compatible 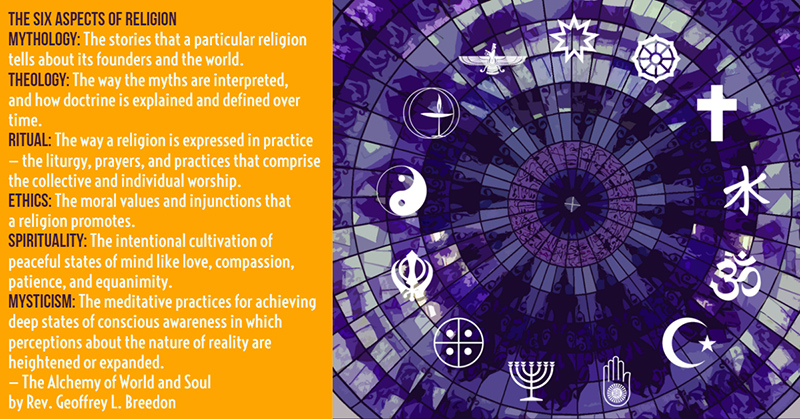 Today I thought I’d post another excerpt from The Alchemy of World and Soul. Below is a chapter called Where Science and Religion Can Be Compatible:

Physicist Sean Carroll wrote recently that “The reason why science and religion are actually incompatible is that, in the real world, they reach incompatible conclusions. It’s worth noting that this incompatibility is perfectly evident to any fair-minded person who cares to look. Different religions make very different claims, but they typically end up saying things like ‘God made the universe in six days’ or ‘Jesus died and was resurrected’ or ‘Moses parted the Red Sea’ or ‘dead souls are reincarnated in accordance with their karmic burden.’ And science says: none of that is true. So there you go, incompatibility.”[i]

While I agree with everything Carroll wrote, I disagree with his conclusion. He and most others conceptualize Religion (capital R) as being a whole thing rather than being made up of several constituent aspects, some of which, I believe, are compatible with Science (capital S). Religion can be subdivided into the aspects of Mythology, Theology, Ritual, Ethics, Spirituality, and Mysticism, some of which are compatible, at different levels, with Science.

Mythology is the stories that a particular religion tells about the world and its founders. If these stories have no historical or provable component, they require Faith (yes, with a capital F). The Mythology of Religion is not compatible with Science. Science requires proof for belief and remains willing to change its mind. Mythology must be taken on faith.

Theology is the way the myths are interpreted, and how doctrine is explained and defined over time. Theology changes, but myths do not. Here, as with Mythology, there can be little compatibility with Science. Theology generally seeks to reinforce the founding beliefs espoused by Mythology and give them legitimacy through philosophical rationalization rather than empirical evidence. One proves the existence of a supreme being that created the universe with Theology but not with Science (unless some better evidence to the contrary arises at some point).

Ritual is the way a religion is expressed in practice — the liturgy, prayers, and practices that comprise the collective and individual worship. That final word — worship — is the key indicator that Ritual is not compatible with Science. There simply isn’t any overlap between Ritual and Science, unless it is in the anthropological study of religious ritual.

Ethics, the moral values and injunctions that a religion promulgates, are usually thought of as the purview of philosophy, but I think Science can study ethics. Certainly, psychologists study the ethical development of humans, and sociologists and anthropologists can study the ethical behaviors of different societies around the world and throughout history. While these fields are not what are typically thought of as “hard” science, they all make use of the scientific method to establish facts about the human world.

Spirituality, the intentional cultivation of peaceful states of mind (like love, compassion, patience, and equanimity), is another aspect of Religion that can be compatible with Science — in particular, psychology. Psychologists can and do study different states of mind, the means for achieving them, and their effects on individuals and communities.

Lastly, Mysticism, by which I mean the meditative practices for achieving deep states of conscious awareness in which perceptions about the nature of reality are heightened or expanded, can be an aspect of Religion that is compatible with Science. Neurologists can study the way these states of mind impact, and are impacted by, the brain. Mysticism is an inner mental practice of examining the Ultimate Nature of Reality, an area Science leaves to math and physics. The mystic perception of the Ultimate Nature of Reality could provide a useful perspective for mathematicians and physicists to explore the universe through Science.

You can continue reading the rest of the excerpt here.