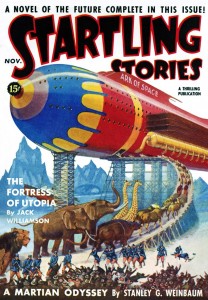 I came across two things that at first seemed unrelated to me that later came together in my mind while I was walking home last night. The first is a fun blog over at Electrical Engineering Times. Clive Maxfield has a blog where he often discusses sci-fi geek stuff, because who better to enjoy sci-fi geek stuff than electrical engineering geeks. He has a post in which he listed his favorite generation ship sci-fi novels. There is a nice entry on Wikipedia that explains generation ships and gives some examples from literature and film. There is also booak by Simone Caroti called The Generation Starship in Science Fiction: A Critical History, 1934-2001. I haven’t read the book (it’s a bit pricey), but it sounds interesting from  the bits I’ve perused on Google Books.

Maxfield lists several novels: Robert Heinlein’s Orphans of the Sky, Brian Aldiss’ Nonstop (aka Starship), Gregg Bear’s Eon, John Varley’s Titan (which isn’t really a generation ship), and Arthur C. Clark’s Rendezvous with Rama. He also mentions the films Pandorum and Wall-E. The only one I hadn’t read or seen was Harry Harrison’s Captive Universe, which I promptly ordered used from Amazon.  However, Maxfield didn’t mention the Canadian TV series Star Lost (created by Harlan Ellison), which is a fun but, dated series.

It’s interesting how many generation ship stories revolve around a crew that has forgotten they are on a starship. I wonder why that is?

Something else I saw made me think about generation ships, or at least colony ships.  Physicist Marcin Jakubowski, founder of Open Source Ecology, is leading a team in assembling the Global Village Construction Set, an open source set of blueprints and instructions for fabricating the 50 essential industrial machines for a modern civilization. The intent is that communities and governments in developing nations can use this construction set to jump-start their societies and economies and create higher standards of living for their citizens.

That’s a great idea, and a huge help to people living in developing nations. Of course, my first thought was that these are the same 50 industrial machines that would be required for creating a modern civilization from scratch on a new planet.

And thought led me to thinking about the work of the folks at the DARPA 100 Year Starship Study and Paul Gilster’s Centauri Dreams blog. The 100 Year Starship Study was a symposium held this past October to explore the various disciples necessary to mount an interstellar expedition while Glister’s blog is a more personal exploration of the same subjects.

I’ve given some thought to what it might be like to live on a generation ship. The Celestial Blade (The Starhip Destiny – Book 1) takes place on a generation ship making a 2000-year voyage to the Andromeda galaxy in hopes of responding to a radio message. It’s not just humans, but several species, each in their own continent-sized compartment, making the journey. The story had less to do with the end result of the voyage and more to do with a mutiny, but it’s fun to contemplate the process of travelling great interstellar distances in a mammoth starship. Clearly it’s a theme that has resonated with some of the best sci-fi writers. Hopefully, my contribution to the sub-genre will be as entertaining and thought provoking