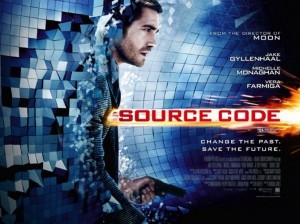 My wife and I watched Source Code last night. It’s been a while since we watched a movie. We’ve been watching HBO’s Carnivale and the BBC crime drama Waking the Dead. But, we finally ran out of episodes of both.

I have to say, I enjoyed Source Code much more than I expected to. Here’s a brief synopsis from Rotten Tomatoes:

When decorated soldier Captain Colter Stevens (Jake Gyllenhaal) wakes up in the body of an unknown man, he discovers he’s part of a mission to find the bomber of a Chicago commuter train. In an assignment unlike any he’s ever known, he learns he’s part of a government experiment called the Source Code, a program that enables him to cross over into another man’s identity in the last 8 minutes of his life. With a second, much larger target threatening to kill millions in downtown Chicago, Colter re-lives the incident over and over again, gathering clues each time, until he can solve the mystery of who is behind the bombs and prevent the next attack.

That’s the essential set up, but the film is far more interesting and complicated than that. Unfortunately, it’s hard to discuss the film without giving away some of the key elements and surprises.

After the first trip back into the consciousness of another man, Stevens (Jake Gyllenhaal) awakens in a damaged capsule of some kind with a video monitor where a woman named Goodwin(Vera Farmiga) talks him through the mission.

After several more trips back in time, Stevens becomes more and more suspicious of Goodwin and the project director Dr. Rutledge (Jeffery Wright). He eventually gets them to admit that he is dead. Well, not entirely dead. His brain is still working and it is plugged into the system that lets him travel back into someone else’s consciousness. The capsule he is in is just a mental projection his mind creates to deal with being mostly dead.

So, Stevens is trapped. He wants to die, but they won’t let him die until he finds out who the bomber is. Interestingly, he discovers that if, when back in the other man’s consciousness, he doesn’t die, he can stay past 8 minutes.

He realizes that he can save the people on the train, and especially Christina (Michelle Monaghan), the woman he wakes up across from each time, a woman he seems to fall for immediately. Why does he fall for her so quickly? I suspect because his consciousness is blending with that of the man whose body he is inhabiting – a man named Shaun – who seems to have had a crush on Christina for a long time.

Stevens finds the bomber and convinces Goodwin to send him back one more time to save the train and Christina, and then shut his body down – let him die – after the 8 minutes have elapsed. Goodwin defies Dr. Rutledge to do this, and Stevens manages to save the girl and the world. And he remains in that world, his consciousness in another man’s body, after the 8 minutes are up. By changing time he has created an alternate time-line.

Which all sounds great, until you realize that the guy whose mind Steven’s has supplanted is the only one who effectively died, because for Stevens’s consciousness to live on, he needs Shaun’s body. Sucks for Shaun.

I’m not sure if that moral and philosophical dilemma slipped passed the filmmakers, or whether they were hoping it would slip past the audience, but it bothered me. I would have been satisfied if they made it clear that the two consciousnesses were merging. In fact, it would have been an even more interesting film, if Shaun became aware of the fact that Stevens was inhabiting his mind as the film progressed.

Those quibbles aside, I thought it was an extremely well done time travel story. Tightly written, by Ben Ripley and well directed by Duncan Jones (who directed Moon). One of the things I most admired about the writing is that the story essentially takes place in three locations; the train, the control room, and the capsule/cockpit. I’m sure that helped to keep production costs low. The film was made for only $32 million, which these days is like the catering budget on big films. The fact that it grossed $123 million worldwide, hopefully means these filmmakers will get to make many more interesting and intelligent sci-fi films.