Doctor Who – The Writer’s Tale 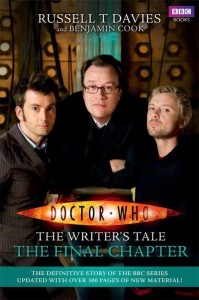 I absolutely loved this book. I’ve been a big fan of the Doctor Who reboot since I caught an episode of season one on BBC America. When I came across this book during a search on Amazon, I snapped it up. I was always impressed with the storytelling in the series and I knew that Russell T. Davies was the driving force behind the show (and behind Torchwood as well)

The books is a series of email exchanges between Davies and journalist Benjamin Cook during Davies final two years on the show as executive producer and head writer. It is one of the best books on the process of writing that I have ever read. As a writer, it was extremely instructive to read the thought processes behind the creation of a the final season of Doctor Who. I think Russell Davies is an excellent writer. Extremely good story instincts. So, reading though his email exchanges was like peaking into his mind as he worked through the stories and characters and took them from ideas to scripts to shows that I had seen.

It isn’t a book about how to write, but a book that shows the process of writing firsthand. In detail. I think it’s useful for any writer, but especially for anyone who wants to write for film and television. The book is also chock full of excerpts form scripts (some as first drafts) and photos from the set.