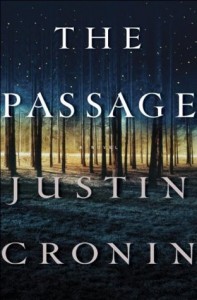 I read The Passage a few months ago, but I didn’t have this blog then.

Although I did like The Passage, I felt I could have liked it much more. Partly that is because I was not expecting a 250 page prologue. Nor was I expecting the time jump in the story after that prologue and the introduction of a whole new set of characters.

Briefly, The Passage is about a virus that is found in the wild and weaponized by a secret government project. The project is supposedly trying to find a way to use the virus’s properties to extend human life indefinitely. They end up creating a bunch of vampire like monsters that eventually cause the collapse of world civilization leaving a hand full of survivors fearing the dark.

That’s the setup.  But it’s the execution that soars. Justin Cronin can write. I mean really write. He might write too much, there are those who will say that the novel could have been improved by being shorter (I’m one of them), but he writes so well that I’ll forgive him for an unnecessarily long prologue and a plot that seems to meander too much at times. His use of flashback to enhance the characters at key points in the story is really well done. Flashbacks of any kind are difficult to pull off. Too often they are just info dumps. But Cronin makes sure they have plot, character, and emotional significance. Stupidly hard to do. I took notes for future stories where I hope to do similar things.

So, while it is a story that is, I think, a little too long, it is an extremely engaging read.