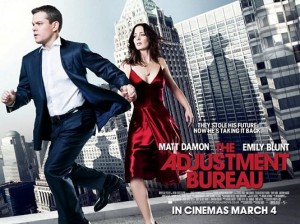 My wife and I watched the Adjustment Bureau over the weekend. Although it had timid and some fuzzy edged metaphysics (I like my metaphysics a little more bold), I found that I enjoyed the film quite a bit. Partly this is due to the wonderful on screen chemistry between Matt Damon and Emily Blunt who play star crossed overs who are not “destined” to end up together. It seems the two of them are supposed to live lives without each other. That is the is the plan. And deviation from the plan results in an adjustment. By men in fedoras.

Yes, that sounds a little hokey when you put it like that, but it’s all good fun. The story is adapted from a Philip K. Dick short story (which I am ashamed to say I haven’t read). As David Norris (Damon) learns, The Plan, which guides the lives and destinies of everyone on the planet, is created by the “Chairman.”  And the Chairman doesn’t like it when things don’t go according to plan.

The story poses several interesting questions about destiny and free will, with a thin layer of Western religious mythology layered overtop. It’s easy to interpret the Chairman as some version of the Judeo-Christen-Islamic God and the man in stylish hats as angels of some kind. The questions aren’t examined in any depth, but they are resolved to some small degree by the end. Unfortunately the question of how free will impacts love is not explored as in the detail that would probably have made the entire film more satisfying, but I felt like I’d be happy to watch it again some day, and that is generally the best indicator of how much I like a film.