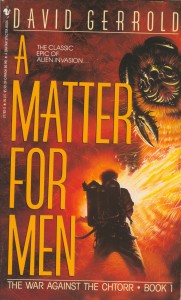 Interestingly the series does exactly what I criticized Falling Skies for doing – pose a mystery as to why the aliens are invading. But it does much more than that, it poses a question of exactly who the  invading aliens are and how they are invading. The manner these questions are presented in is one of the main reasons the story works so well.

The series is currently four novels long and Gerrold has been working on the fifth (and hopefully sixth) since the early 1990’s. I don’t know what’s taking him so long (other than wanting to get the series right), but I’m assuming it will be worth the wait.

What makes the series so interesting is that the alien invasion begins first with a series of viral plagues that sweep the world killing most of humanity. Then elements of an alien ecology begin to appear around the world rapidly supplanting their earth competitors. Alien plants, animals, and giant furry worms (whose roar sounds like “Chtorr”) begin to take over the earth’s ecosystems. And the hero, Jim McCarthy, a military scientist struggles to discover who the real aliens are behind the invasion and how to stop it.

It’s great fun and a great read – evidence by the fact that I’m still excited for the 5th novel after nearly 18 years.