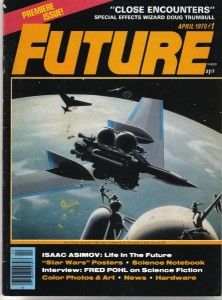 Every Friday when I was growing up, our family would go out for dinner. Afterward we would stop at a bookstore. My brother and I could each get one book or magazine for the week. So, once a month I excitedly searched the shelves for the latest issue of Future Life Magazine.

Published from 1978 to 1981, Future Life Magazine presented a blend of science and science fiction that captivated my young imagination. The covers were always striking and the stories and articles engaging and informative. I was shocked and saddened when it abruptly stopped publication.

About three years ago I was thinking about the things that influenced my interest in science and science fiction (and by extension fantasy) and Future Life popped into my head. After some quick searching online, I found a set of the entire run on ebay for the ludicrously low price of $10

A week later, I was lost in a nostalgic haze. I still can’t believe how much of the individual magazines I remembered. I remembered all of the covers and the photo and art spreads and most of the articles and short stories. It was fun to go back and reread what I had devoured as a boy of ten, eleven, and twelve.

John Zipperer has a great issue by issue review of the magazine with scans of all the covers and some of the interior spreads. Insanely cool stuff for retro sci-fi geeks.