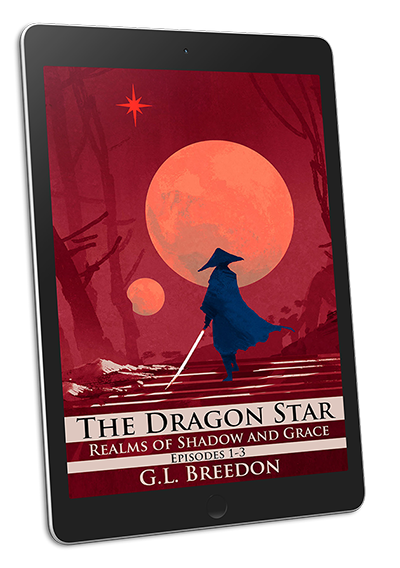 A blood-red star blazes to life in a crow-black sky — A celestial herald signals the birth of a new goddess in a land of absent gods.

Ancient temple stones, splintered with time and buried in jungle vines  —  Junari, a priestess-prophet, wakes sweating from a dream, pledging to lead a pilgrimage of the new goddess’s believers to a forbidden realm.

Midnight shadows come to life, churning with violence and death — Sha-Kutan, a  man haunted by demons, struggles to protect a young princess hunted for her deadly powers.

Clashing swords, flaming arrows, and cries of sorrow — Palla, a member of a carnival of rouges, battles for her life in castle trapped under siege.

Daggers, arrows, and poisoned wine — Tin-Tsu, a prince-turned priest, is attacked by assassins as he assumes the throne of a war-torn dominion.

Archaic and indecipherable script splayed alongside otherworldly paintings — Kellatra, a powerful sorcerer, flees for her life with a stolen book of arcane lore.

With their lives irrevocably intertwined and altered, these heroes all ask the same questions: Will the new goddess set them free? And can they save the world when the old gods finally awaken to challenge her?

The Dragon Star is an epic sword and sorcery opera with a gripping story, an intricate plot, a large cast of finely drawn characters, and a richly detailed world.

Thank you for your interest in The Dragon Star. You can use the links below to download an ebook of the first 300 pages of the novel.
The full novel is available now at:
Amazon US
Amazon UK

The Dragon Star Sample (.pdf file)
See the links below for instructions on side-loading books onto your ebook reader.