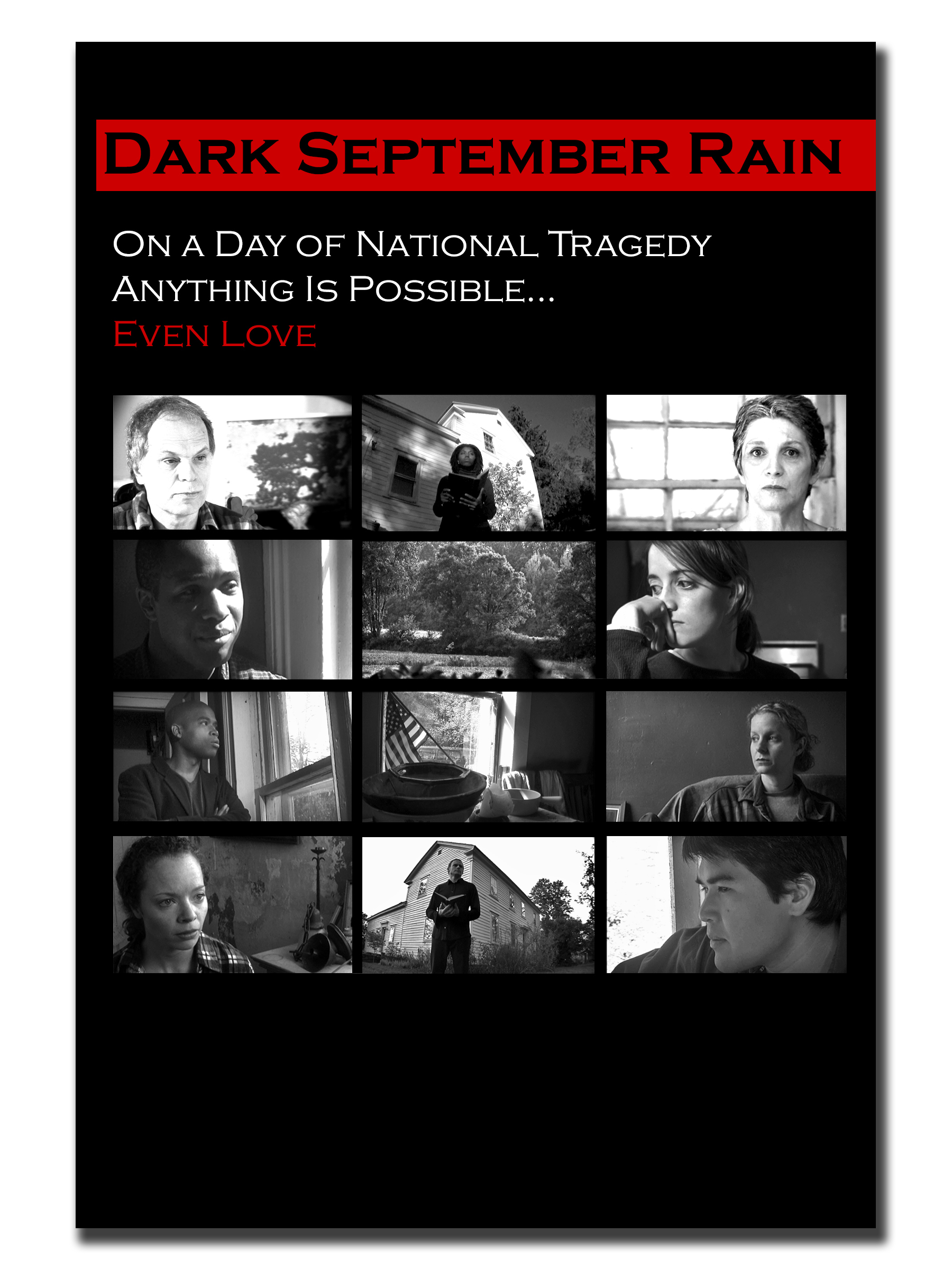 The lights come up…

On the FIRST DAIMON and the SECOND DAIMON standing center stage.  The DAIMONS appear to be male and female, though they may be young or old, of any racial or ethnic background. The First Daimon carries a book that will be read from throughout the play. During the play the Daimons will quietly echo the lines of the other characters as well as subtly imitate their actions on stage.  They may also occasionally pick up one another’s lines in mid-sentence and continue speaking for each other.  They are dressed all in black and their makeup is expressionistic suggesting the woodcuts of William Blake.  They appear as through they have just stepped out of an old black and white photograph, or the paintings of Edward Munch. The sounds that follow them are reminiscent of those heard in a forest on a late November afternoon; gray and indistinct. They are always present somewhere on stage. The First Daimon reads from the book.

FIRST DAIMON: “The end was predicted long before its arrival and its continued delay led many to believe that their fondest wishes had been fulfilled while their darkest fears had been allayed.  But all beginnings come to an end, regardless of how many twists and turns occur in between these two cosmic poles.  Alpha and Omega can only be separated for so long.  It is their nature to desire union.  The door is closing.  The lights are dimming.  And even the air smells stale and insufficient to sustain the hope that creeps in against the inevitable.  The end is no longer coming, no longer on the horizon, no longer at a distance, it has arrived and it is demanding to be admitted.  Once we have let it in, into our country, into our homes, into our consciousness, and into our hearts, what hope can there be for us? What comes after the end?”  William Halfpence, Three Days of Autumn Night: A Journey Into the End of Days, The Oxford Press

The lights come up on the rest of the stage and set as the Second Daimon speaks.  The farmhouse has many rooms, but the one being lit at the moment would be best described as a gathering room, because it here that the family routinely comes together. The room has two couches and several chairs placed among bookshelves and antique farming implements.  In one corner of the room there is an old Franklin stove and at the other end is a small table used for sewing. Although there are a number of candles and oil lamps around the room, at night the room is illuminated by three lamps dating back to the early twenties. At the moment the room is lit by the morning sunlight streaming through the lead laden windowpanes. The only truly modern aspect of the room is an old television set, facing away from the audience.

The Second Daimon speaks, but does not read from the book.

SECOND DAIMON: The farm is nestled in the bosom of two near-mountain-hills, its fields rolling along the valley bottom, cloaked in spring-planted, spring-fed wheat grown to a pale rust beneath the early Autumn sun.  The town is not far away, just over the tree-topped hills and past a small crystal river that runs so swift not even the dead of winter can freeze its course. The wheat runs the length of the valley, racing neck and neck with the sweet-corn and slender barley, collapsing together at the fence that squarely encircles the barn. Behind the fence, behind the chickens and their coop, behind the sows and their wallow, behind even the grazing cow and the garden of green vegetables, sits the house.  The farmhouse has stood beneath these lumbering hills since before the birth of the last century, its oaken frame weathered, but not yet bent against the ravages of wind and rain and time and memories of summers gone by.  Behind its solid doors, past its slim, sun-warped windows, within its thin, plaster and horsehair walls, upon its cracked marble hearth, lies the heart of every farm and the soul of every farmer. Within the house are all the things one expects to find in a structure that has survived the greatest century still standing upright.  There is pain and loss, joy and sorrow, solace and wonderment, faded memories, silent dreams, and time-bleached desires. There is also a family.  One not born, but inherited and made, like most families, from tenuous bargains, compromises of will, mutual affection, hard earned respect, and the stain of sweat and love and labor beneath the wide-open sky.  Those that bequeathed the farm to this new family remember it well.  So well that it seems to them like only yesterday they walked its narrow halls, plowed the tender soil, and lived.

The lights come up on BEN and HARRIET.  They are in their late seventies, dressed in farm clothes; the same clothes they wore year after year while they were alive. They are perfectly at home in the farmhouse, though they no longer live there, or anywhere else for that matter.  They inhabit the house, but not in the material sense.  They seem weary yet resolved. Their presence evokes images not so much of a shadowed and faded Norman Rockwell painting as of the sepia tones that dominate the photos of Edward Curtis, and this somehow infected with the sorrowful sensibility of Pieter Brueghel’s rural paintings such as A Gloomy Day. The music and sounds that accompany them possess reminiscent strains of Aaron Copeland sifted through the tones of Hank Williams, Arlo Guthrie, and the rural blues of Robert Johnson and Muddy Waters: The frozen sounds of a lifetime suspended in eternity.

HARRIET: The day I first set eyes on the house was the day that Ben got out of the Army.  The Great War had just ended and I was on my way to the train to greet him.  The river had flooded the main road and so my father took the wagon down a path we seldom traveled, running as it did through the valley, and not straight into town.  The dirt trail, hardly a road, ran alongside the fields.  It was corn I think they had planted.  Maybe wheat.  It was so long ago. But I do remember the house.  It must have been forty years old at the time, and it hadn’t seen a coat of paint since the day it was built.  The wood looked parched and brittle beneath the high summer sun, but I could tell that the house was sturdy.  I knew it would hold up, and I knew it would hold a family.

BEN: I was born the same day the Wright Brothers lifted off the ground at Kitty Hawk.  Their first twelve minutes in the air were my first twelve minutes breathing the air. Something about that connection marked me, because I was forever fascinated with flight.  It was all I dreamed of as a boy.  Riding with the clouds.  When we entered the war, I lied to the government about my age and schemed and plotted to get into the air.  I never got my wish.  I only ever saw the war from the ground.  When I came back, Harriet told me about the farm.  It was for sale.  The woman who owned it had lost her husband and both her sons to the war. We knew we wanted a family, and we knew a farm was a good place to raise one. I had never planned to be a farmer, but I really didn’t know anything else. So, I hired a pilot for a biplane ride from a traveling circus and took Harriet up for both of our maiden voyages aloft. That was the first time I saw the farm: from the air. Even before I landed, I knew I would die in that house.

HARRIET: Living through two world wars and two families makes you appreciate that the end is never what you think it will be.

BEN:   Especially when it’s your own end.

HARRIET:  And the end is never what it seems at its beginning.

On a Day of National Tragedy
Anything Is Possible…
Even Love

“… A piece of art that probes deep into the ordinary lives of people.”

Thomas Moore, author of Care of the Soul and The Soul’s Religion

“Geoffrey Breedon’s realization of his stage play is a cinematic tour de force that is destined to have more people claim to know it than have actually savoured its generous length and, sadly, have little impact on the social conscience of our survival of the fattest world-think.”

The Story:
Gabriel and five friends are stranded on his family farm on a day of national tragedy that forces them to confront their ideals and fears. Meanwhile the ghosts of Gabriel’s great grandparents recollect the horrors of the 20th Century, from World War One and the Great Depression to World War Two and the deaths of their children. Throughout all of this, two supernatural beings reflect on the events of the day while reading from a sacred black book. As night falls, it becomes clear that the tragedy affecting the nation has reached the farm, leaving Gabriel’s life hanging in the balance.

Reminiscent of films such as Wim Wender’s Wings of Desire, Ingmar Bergman’s Persona, Alain Resnais’s Hiroshima Mon Amour, and influenced by the writings of philosopher Ken Wilber, Eastern mysticism, and Western spirituality, Dark September Rain is a provocative and inspiring exploration of what it means to live in a post-September 11th world.

Based on a stage play (click here to read), Dark September Rain is available at Amazon.com as a DVD and as a digital rental/purchase. The haunting score by Juan Cruz Masotta is also available as a CD or MP3 download.

A PDF of the original press kit can be found here.