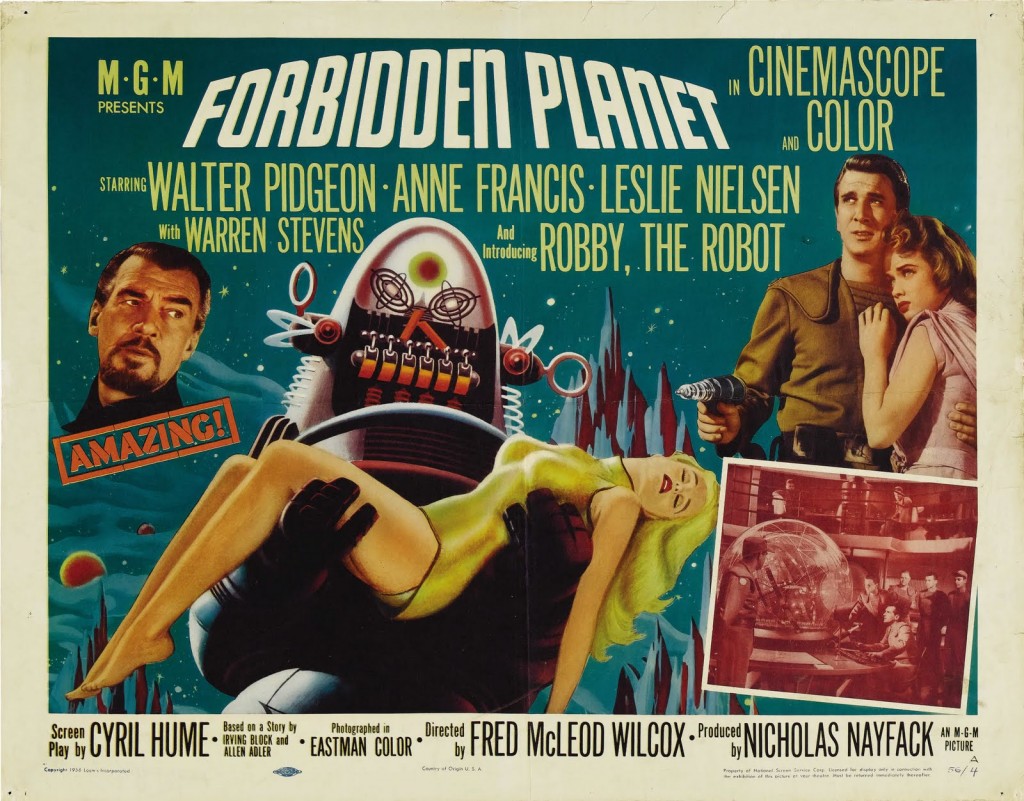 It’s been a busy month since my last post. A job that took me to Chantilly, France. A week in Paris with my wife. A few days back in NYC. Then 10 days in Santa Monica and San Francisco to visit friends and to officiate the wedding of a childhood friend. Then a week to recuperate.

Needless to say, I have not been getting much editing done on The Edge of Eternity (Wizard of Time Book 3). Hopefully I can get the second draft finished by mid-November and a third draft by the end of the year, get it to the editor/proofers in January and have it out in March. That’s the plan.

My last post about sci-fi films of the 1950s left me wanting to watch a few. This last weekend, my wife indulged me in a mini sci-fi film festival to celebrate my 45th birthday. We watched The Thing from Another World, Forbidden Planet, Willow, and Stargate.

My wife’s enthusiasm for sci-fi films from the 1950s does not approach my own. In the same way that my understanding of physics does not approach Stephen Hawking’s. But, she loves me, so she hung in there. She did ask me at one point what I liked about these old movies, because the appeal isn’t obvious to her. The special effects tend to look kind of cheesy, the dialogue is stilted, and the stories can be hard to relate to.

This got me to thinking about the question of what attracts me to sci-fi and fantasy in general. The answer was not immediately clear to me.

Why are some people attracted to one genre of writing or entertainment over another? Why do some folks love westerns, while others like horror, and other mysteries or romances? Why do some people eschew genre trappings and only pursue contemporary fiction and drama?

In my own case, something about sci-fi and fantasy lights up the neurons of my brain in a way that other fiction never has. I appreciate a good mystery and love a good western, but nothing kindles my interest like sci-fi and fantasy.

I always loved to read as a kid. My father was a bibliophile and my parents were big on reading being a thing you did as a kid. They were always buying me books, until I started getting an allowance and buying my own. The first book I remember really being interested in enough to want to read twice was a sci-fi book. The first sci-fi book I ever read. I think I must have been about 8 or 9 years old. I remember I was in 3rd grade. I think.

I can’t remember the title of the book, but I remember it was about a space ship that traveled to the moon. To me, most stories have two layers of interest. What the plot is about and what the characters do. But even in that simple sci-fi story I could see a third layer of ideas, even if I couldn’t articulate that. The ideas drew me in.

Sci-fi, far more than fantasy, is about ideas. In essence the idea of a world where things we can only imagine now are possible. This, for me, is probably the essential appeal of sci-fi and fantasy. The immersion in a world that is different from our own. In sci-fi it’s usually an extrapolation forward into some possible future, while in fantasy it’s usually a reimagining of a particular time in our past. In sci-fi the impossible is accomplished through science and technology, while in fantasy the impossible is accomplished through magic.

Of course it’s deeper than that. There is also a strong vein of justice that dominates genre fiction. Criminals get caught in mysteries. Outlaws brought to the law in westerns. Romance, sci-fi, and fantasy also have a strong sense of moral justice running through them. That, I think, is also part of the appeal. When you read a contemporary non-genre novel you expect that the villain may go unpunished or the protagonist may be a reprehensibly unlikable character. Some genre fiction blurs that moral line with unsavory characters and plots with thwarted justice, but by and large they present relatively stable moral universe. Evil is punished and good rewarded.

Now, there are probably plenty of pseudo psychological explanations for why people would be attracted to that kind of story world. I can only speak for my own, and hope that I am aware enough of my motivations and desires, conscious and unconscious, to explain them accurately. For me it is not that I wish to escape from the ‘reality’ of our world with its moral complexities and vagaries, but rather that I enjoy imagining the possibility of another world where things are not more simple, but rather where that complexity engenders a deeper sense of the best potentials of human nature even when confronting the worst aspects of human behavior.

Maybe that’s why I really like sci-fi and fantasy.